The year was 1985. ‘Everybody wants to rule the world’ by Tears for Fears was the number one hit, and I was in my first year of high school at Wellington College. John, David and I would catch the 7.20am bus in the morning so we could get an hour of football in before school. Summers, when I was 13, seemed to last forever, and the winters never seemed as harsh as they became as I got older. 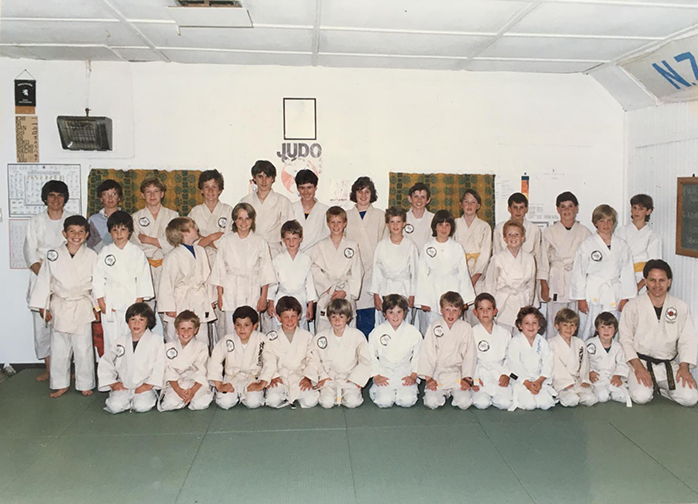 Tennessee’s dad had just opened up a judo hall by the Teacher’s College. We all knew Hilary as a policeman, and I can still remember how excited I was to learn the art of self-defence from someone who was a strong male figure for me since I was knee-high to a grasshopper.

However, it was John who was the real driving force in getting me to start judo. John was a year older than me but with a love of football and adventure, and living in my neighbourhood, we were destined to become great friends.

John certainly had an edge that I lacked. I remember my speech as best man at his wedding, telling stories of the crazy situations that I found myself in by being at his side. He was always there for me like the time we got caught in a blizzard on My Hector in the Tararua Ranges. While having experience as trampers we did not anticipate the change in weather than fast, and it felt at the time that it was only sheer will that got us out alive. Adventures are character building, and John has been the catalyst for much character building!

So here I was, a scrawny kid, talked into judo by my mate. David was also a starter so was just about every kid in Karori it seemed. All the Woods joined. Jason and Lyon were there as was Claudia. Who could have imagined the lives that we would have post the Karori Judo Club?

Two years later, with school cert approaching and playing hockey and golf at a higher level than judo, I decided I had to quit. While I left the dojo in the body, the spirit of judo never left me. I vowed that I would return to the sport I loved.

Roll on 15 years, and I was back on the mats, this time as a thirty-year-old. I was making great progress, and then the inevitable injury happened. I had torn ligaments in my foot and would be out for six months. In the intervening six months, I was offered a role in the UK, and my short return to judo was over.

Eight years passed and John was now living in Sydney. We naturally spent a lot of time together, and he said that he was thinking of getting back into judo. Some 50-year old that he knew had just got his black belt, and it was a goal he had yet to achieve. While the thought of joining him crossed my mind, I was busy with work and getting back into the gym and golf, and the desire was not there. While the body was reluctant, John had once again awakened the spirit, and I knew there would come a time when I would come back to judo.

Roll the clock forward three years and my wife, and I arrive in Singapore. If there was a place to get back into Judo, this was it. Now 40 years old, I knew it was now or never so I made the call to Mr Tang and joined the Singapore Judo club.

Over the past six years, I have had more injuries, than at any other time in my life. I have also had to cross train harder, simply to be able to make it to training each week. The irony is that I have loved every minute of my judo journey and would not change one aspect of the past six years.

Judo is both a martial art and a philosophy for living. The lessons, rather than learnt through a textbook, are lived such as the ability to see yourself as being dependant on others for both your growth and their development. The need to both be strong and contained. The humility that you can only learn having been soundly beaten by someone better than you any day of any week. Self-acceptance that comes as judo continual reminds you of the ageing process. Commitment to lifetime goals, and recognition that this commitment is a way of life, not a one-off event.

The past seven years have been some of the most pivotal in my life so far. Looking back, I can see the preparation for my 40’s came as a teenager, in Karori, transitioning, much like now, to a new stage in life. Long-term goals, lifetime lessons. 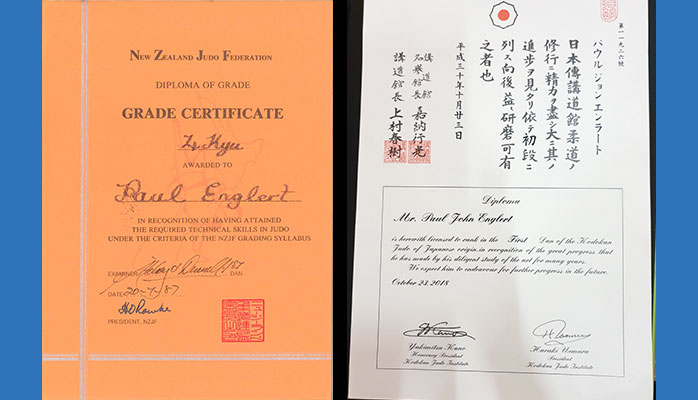